There is no better way to explore Madrid than by bike. We reckon the optimal way to see everything this beautiful city has to offer and to soak up the Spanish culture is to ride one of our comfortable bicycles through the narrow, winding streets. Therefore, our bike tour is ideal for anyone who wants to get to know Madrid in a short time and in a leisurely manner – the pace is very relaxed, and includes plenty of stops to take photos and for your experienced, local guide to explain the sights around you.

Our tour’s route is designed to give you a good sense of the layout of the city, and you’ll get to know the “must-see” places, as well as the hidden corners away from the typical touristic paths. You’ll receive tips and hints from your guide as well, which will undoubtedly enhance and enrich your experience of visiting Madrid. By the end you’ll be full of ideas for where to return to and investigate afterwards!

Our Madrid Highlights Bike Tour starts from our shop, which is located in the heart of Madrid, and can be booked in several languages. It takes about 3 hours, and we will ride mainly through small, quiet streets and parks.

Whether you’ve come to Madrid as a tourist or for business reasons, don’t miss the opportunity to cycle around this lovely city. The social and outdoor life is one of the most important parts of Spanish culture, so join in and get to see it all by bike!

Here is a short selection of the highlights we will see:

The best of Madrid in 3 hours

You will be guided by an experienced local, who shows you around while giving you all kinds of useful information, hints and tips which will undoubtedly enhance and enrich your experience of visiting Madrid.

Here is a short selection of the highlights we will see:

While riding your bike through the narrow streets of Madrid, sometimes it feels like you are time-traveling, passing gorgeous and imposing historical buildings, all with their own story. Our route is designed to give you a good sense of the layout of the city, and get ideas for where to return and investigate afterwards. 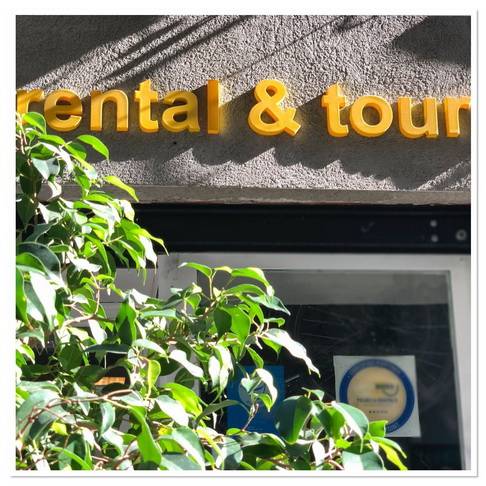 The people of Madrid are called Madrileños – known for their hospitality and ability to really enjoy their leisure time, Madrileños spend a lot of time at the bar eating tapas, drinking wine, beer or vermouth, and chatting with friends and family.

It’s also safe to say that they enjoy their nights well into the little hours. The social aspect of Spanish culture is one of the most important and significant for Spanish people, no doubt thanks to the warm climate. They love spending time outdoors in the sun, talking and debating about anything possible that is on their minds.

Our Daily Bike Tour starts from our shop, which is located in the heart of Madrid, and is suited to those who speak or understand English. It takes about 3 hours, and we will ride mainly through small, quiet streets and parks.

First, we will guide you through the hippest areas of Madrid, the neighborhoods of Chueca and Malasaña.

Chueca is named after the 19th-century composer Fréderico Chueca. This neighborhood is characterized by its beautiful architecture in the style of ‘Madrid de las Austrias’, since it was established under the Austrian Habsburg Family. It’s modern, trendy, and is a great area for shopping and eating.

Malasaña has a slightly more bohemian vibe, since it was marked by ‘La Movida de Madrid’ in the nineteen-eighties. Malasaña has a lot to offer – as well as plenty of bars, venues and discos, it has all kinds of small trendy shops full of vintage clothing, vinyl record shops, and at the weekends there are little street markets with all sorts of curiosities.Both Chueca and Malasaña are a very important part of the bustling nightlife in Madrid. Here the weekend starts on Wednesday – the locals will keep you awake from dusk ‘till dawn! 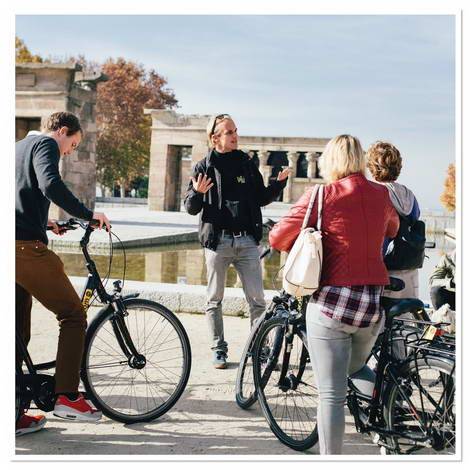 The spectacular views from El Parque Del Oeste will take your breath away! In this quiet city park (one of many) we find the Egyptian/Roman Temple of Debod that was a gift from the government of Egypt, after it was rescued in the 1960s from ending up on the bottom of Lake Nasser (former valley of Nubia) in the south of Egypt. This view allows the guide to explain details about the origin of Madrid, and show the sheer size of the largest city of Spain.

Next, we think you will be impressed by the mighty Royal Palace, built by the first king of the French Borbón family, Felipe V. Here you’ll witness the wealth of the old Spanish empire – this palace is the largest functioning palace in Europe, with a staggering 3,418 rooms! The beautiful Plaza de Oriente square was created in a typical style of garden architecture that was introduced by the French – the square is flanked by the Royal Palace and the Royal Theatre.

The emblematic Plaza Mayor is a must-see location and of course, our bike tour will pass it too. The old market centre of Madrid is the perfect location to eat a delicious bocadillo de calamares (calamari sandwich) like the Madrileños like to do! The market centre dates back to the 15th century when Toledo was still the capital of Spain, but Madrid had still become important as a leisure city for the royals. The square’s architecture is a perfect example of Habsburg Madrid, as we mentioned earlier. The old market square had a make-over in the early 17th century thanks to Felipe III, and that’s when the guild houses all around the square where built. 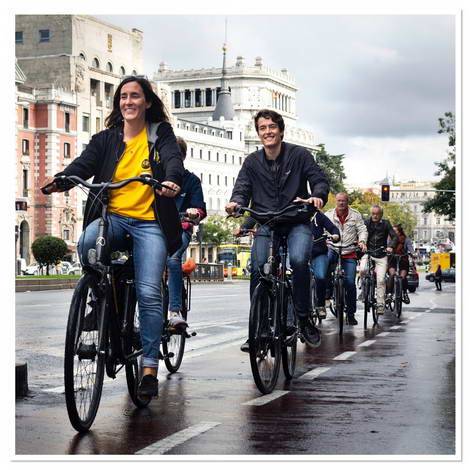 Mealtimes in Spain are always a point of interest for visitors – when you’re from abroad and it comes to dinner time, you’ll likely notice that you’re arriving at the restaurants a bit too early! This means you’ll run the risk of falling into the typical tourist traps, and end up paying too much for less-than-average food. Your guide will give you lots of useful hints and tips to allow you to make the most of mealtimes in our beautiful city!

Next up, we head to El Barrio Las Letras, which translates to the Literary Quarter. This area is replete with art galleries, antique shops, and beautiful houses. In the 17th century (the Golden Age of Spanish Literature), Cervantes, Tirso de Molina, Lope de Vega, and Quevedo among other authors, lived in this neighborhood. Some streets pay homage to these important intellectuals with quotes from their works featuring on the ground and the walls around you. There is for example the following quote from Miguel Cervantes (from Don Quijote): “In a place in La Mancha, whose name I do not want to remember, it was not long ago that a gentleman lived in a shipyard, old buckler, skinny nag and running greyhound“.

Just before we arrive at the most popular city park in Madrid, we’ll be passing the Fountain of Neptune – the first of two fountains where soccer victories are celebrated – which was adopted by Atlético Madrid.

What will next catch your eye is one of the most important art museums in Europe, the Prado Museum – which can be described as the Louvre of Madrid! Its collection is considered one of the finest in Europe of art created between the 12th and 20th centuries. One main feature is the Spanish Royal collection, with work from royal court painters like Francisco Goya and Diego Velazquez, and it also boasts names like Hieronymus Bosch, El Greco, Peter Paul Rubens, and Titian.

With its 1.4 km2 (350 acres) Retiro Park is not the biggest park in Madrid, but it’s likely the most beautiful and popular park in the middle of the city. Once a private rural retreat for the Royal Families that reigned in Spain, it was located for centuries outside of the city walls of Madrid. 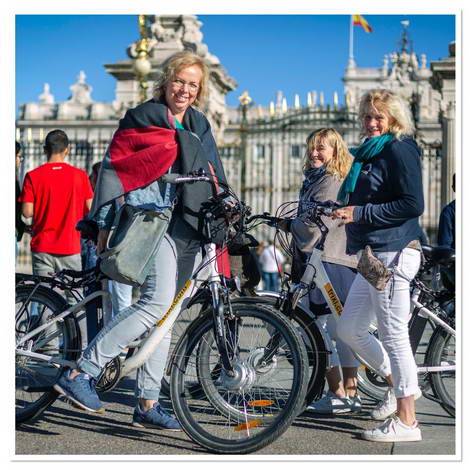 In the mid-19th century it became a public park, and never lost its popularity. For both locals and visitors, this park is the best place to take it easy – the beautiful park offers enough places to enjoy a fresh beverage in the sun or shade, and it also some attractions to offer, like the Crystal Palace and the statue of The Fallen Angel. Retiro Park is also popular for skating, thanks to the massive avenues that go all through the park. During the hot summers, the local Madrileños will seek out shade and leisure time in this green oasis. It’s a quiet haven, and yet it’s really not far from the bustling city!

Towards the end of the bike tour we will finally see the incredible city hall of Madrid (el Palacio de Cibeles), an enormous building built in the early 20th century to house both the phone and postal services. It is now open to the public, and has space for exhibitions, a top floor with amazing views over the city, and of course a bar to enjoy a coffee or something stronger.

‘La Casa de las Comunicaciones’, as it was known, is located by the famous 18th century Fountain of Cibeles – this fountain is the second sports-fountain (as mentioned earlier), with which the other national soccer team Real Madrid celebrate its victories.

The water of Cibeles comes from a natural water source deep underground, and is the reason that the Spanish government decided to build the bank of Spain (Banco de España), in this area, as it allowed them to build the vaults deep underground. In times of crisis, thanks to the construction of a moat with drawbridge, they could surround the vault with water from the natural water source of Cibeles, and flood the moat!

And now, after a great few hours exploring Madrid, it’s time to make our way back to the shop – just in time for a tasty ‘menú del día’! 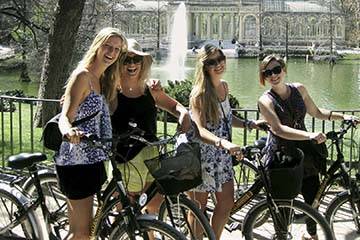 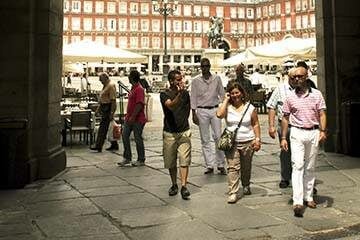 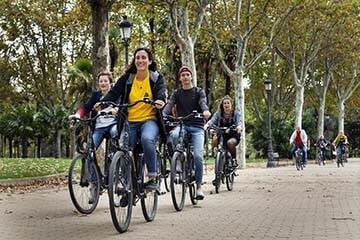 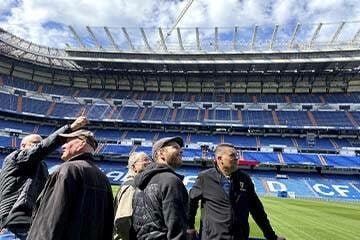