Christmas in Madrid: The “Reyes Magos”

Christmas in Madrid: The “Reyes Magos” 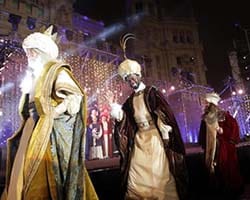 It is still Christmas in Madrid: Who are the Wise Men?

While in most of Europe people and mainly the children are looking forward to Christmas on the 24th or 25th of December, in Spain and in Southamerica the children can’t wait to see the “Three Wise Men” / “Three Holy Kings”. Actually, in Spanish it sounds much more magic, as the “Reyes Magos” – if you translate the words one to one – mean “the Magic Kings”. Doesn’t it sound much more promising then someone being wise? Who wants wisdom when we can have magic?

In Madrid, as in the whole of Spain, the “Reyes Magos” are the Three Wise Men from the East (Balthazar, Melchior and Caspar) who followed a star and came bearing gifts for the Baby Jesus. This special day is celebrated on the 6th of January.

A few weeks before this important date, the children will write a letter to the “Kings” to ask for their wishes, be it a toy, a bike, sweets or even a new job for the mother or the father if the child is very worried. Most children deliver the letters to the King in their city or during the fantastic Kings Parade on the 5th of January in the evening. On this important day, once the 3 Kings arrive by helicopter, train or with their camels….they will form part of an extraordinary parade accompanied by around 2.000 participants like dancers and other artists, splendidly decorated trucks and light shows. It is a really magic event for big and small. It is so important that it is transmitted live per TV.

On the next morning, if the children have provided the camels of the Kings with water and biscuits the night before, they will run to the Christmas tree to see if the Kings have brought the presents they wanted. Naughty children might get sweet ‘coal’ in their shoes instead of gifts.

The last highlight of the day before school and serious life begins, is the gathering with the family to eat the famous “Roscón de Reyes”, a filled round pastry that contains lots of little surprises hidden in it: a small model of a king, a paper crown and a bean. There’s a little model of a king or queen hidden inside, and whoever finds it gets to be king or queen for the day. There’s also normally a bean in there, and whoever gets that has to buy the sweet treat the following year. Nice habits….

Many families collect all the little models during the years so the parents can “cheat” a little bit introducing a second king for the other child that would be disappointed if it didn´t receive the king figure. Some bakeries even make the cakes with more figures inside because they know the drama they will avoid!!!

Trixi.com – Discover the fascinating history of Madrid on our bike tours. Hear the legends and stories of the city as you explore the hidden corners and spots. Learn more about Spain’s culture, history, politics and traditions from the tour’s local expert guide.