When the almond trees blossom, spring is not far away…

When the almond trees blossom, spring is not far away… 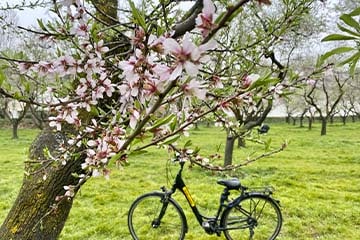 In Madrid we have an urban park – the “Quinta de los Molinos“ – that has nothing to envy to the famous “cherry blossoms” of Japan.

Between February and March, this old park is one of the favourite places for many Madrilenians to go for a stroll.  This is due to the natural spectacle that Quinta de los Molinos offers thanks to the many almond trees in bloom. The ground is transformed into a carpet of pink and white petals which is a real treat also for the children.

The pleasant and magical atmosphere makes you forget that you are in the heart of the capital, next to the Calle Alcalá, near the Feria de Madrid: IFEMA  and the Atlético – Wanda Metropolitano Stadium

It feels like you are in the countryside and you can disconnect from your day to day life.

In summer, during the celebration of the cultural event “Veranos de la Villa”, the people of Madrid can enjoy many activities, among them the concerts that are offered in this park. More information at: https://www.veranosdelavilla.com/es

Quinta de los Molinos is a historic park of almost 100 years located in Madrid’s San Blas neighbourhood and covers an area of 25 hectares, filled not only with almond and olive trees but also with holm oaks, pines, large plane trees, cypresses, eucalyptus and fig trees.

Although it is now located within the city, in the past this part was in the outskirts of Madrid, where many noble families had their summer residences.

The acquisition of the first of several plots that would later make up the estate was at the beginning of the 20th century by Mr. Cesar Cort Botí, a prestigious engineer and architect, professor at the Madrid School of Architecture.

It was precisely in the Quinta de los Molinos that he put some of his urban planning concepts into practice.

Listed since 1997 as a Historical Park, it is the “Travellers` Choice” and No. 58 of the top 1000 things to do in Madrid according to Trip Advisor reviews.

The park is divided into two areas, the southern area has a more agricultural character and the northern part has a more romantic style.

In the north we find a mill, a pond, a building called “Casa de Reloj” and also a small palace from the beginning of the 20th century which was recently restored and refurbished and is nowadays accessible to the public.

This small palace has been transformed into a cultural centre  called the “Open Space“, offering activities, workshops, shows, circus and much more for children and teenagers, but also for the whole family .  This is an ideal place to rest and have a coffee after walking through the park.

In fact, the mansion that today houses this centre is César Cort’s most significant work and also served as his residence.

The Quinta has belonged to the City Council of Madrid since 1982 but until 2018 there was no activity; only then the City Council decided to dedicate a space designed for the youth of Madrid. In addition, the centre has a catering school for young people in vulnerable situations.

In short, the park offers activities for all tastes and ages.

If you are in Madrid, don’t miss the opportunity to visit the Quinta de los Molinos.

Don’t worry: once you are in our Trixi shop in Calle de los Jardines 12, our staff will be happy to show you how to get to the park by bike.

If you are not in Madrid, we invite you to take a virtual tour  – until you can come in person to get to know the Spanish capital.

We look forward to seeing you soon!

Tags: cultural center Madrid outdoor parks what to do with kids
Previous postWhat do sardines have to do with Carnival in Madrid?
Next postWoman power in Malasaña!
Google Rating
4.7
Book Now