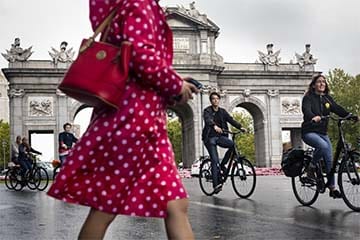 Today 8th of March is the International Women’s Day and we would like to talk about some very important and influential women of Madrid who forged the way for women today.

Some of them are not visible in the first place but we literally topped ourselves with one of them when strolling in the famous Malasaña district, namely in the form of a bronze sculpture that represents a young woman leaning on the wall; this statue is located at the end of the street “Calle del Pez, 42”
When we discovered her we didn’t think we would be taken back a couple of centuries to a legend.

The statue “Tras Julia” (after Julia) from the artist Antonio Santín rests on the side of the Palacio de Bauer. This building once housed the Central University of Madrid, where Julia would have slipped in. Today it is home to the Escuela Superior de Canto (higher school for singing).
Next to Julia, fixed to the wall, is an inscription that clears up any doubts about the dedication: “Tras Julia” – “Homage to the former University of Madrid”

Why was the statue of Julia made?

Julia’s story takes place in the mid-19th century, when women were forbidden to attend university. Society was very different then, with many limitations for the females.
The sculpture was placed there in 2003, after winning a prize from the Empresa Municipal de la Vivienda (Municipal Housing Company).

It is not very clear who the sculpture represents, but the legend says that this lady dressed up as a man to be able to go to the university

Some say that Julia may be a representation of Concepción Arenal (Ferrol, 31st January 1820- Vigo, 4th February 1893), a jurist, writer and human rights activist. It is known that Concepción Arenal, in 1840, disguised herself to study law.

What is interesting is that this sculpture and the fact that it may represent Concepción Arenal has been placed specifically in Malasaña, a place of sentimental value and great pride, but , above all, named after another very brave woman.

So, where does the name “Malasaña” come from?

The district “Malasaña” owes its name to the figure of a woman.

She was Manuela Malasaña, or correctly said, Malasagne, of French origin, and many people are unaware of her relationship with the neighbourhood or even of her existence. But this young woman is very important to the history of Madrid.

Manuela was a seamstress who lived between 1791 and 1808. She was executed when she was only 15 years old, in the context of the uprisings that took place in Madrid on 2nd May. Manuela Malasaña is being celebrated as the Heroine and a clear example of the fierce resistance that the citizens of Madrid put up against the French invasion of 2 May 1808.

As you can see, the district of Malasaña has a heavy and strong heritage as a place where women defended their rights.

Today, it is a very popular, bohemian neighbourhood with lots of little shops, restaurants and theaters. You have to feel the atmosphere yourself.

If you want to know more about Julia, the student of Malasaña, or about more statues at street level or simply want to know a little more about the history and stories of Madrid, don’t miss out on our bike tours at Trixi.com or rent a bike and discover Madrid at your own pace.

Tags: Antonio Santín famous people International Women's Day on the 8th of March Malasagne Malasaña Manuela Malasaña women's day
Previous postWhen the almond trees blossom, spring is not far away…
Next postBoaMistura – “This is beyond Fiction, it must be Reality”,
Google Rating
4.7
Book Now