What do sardines have to do with Carnival in Madrid?

What do sardines have to do with Carnival in Madrid? 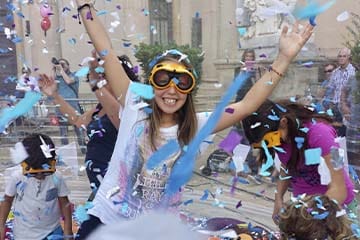 Although the big Carnival festivities have been cancelled this year for Carnival (12th-17th February), there are still some smaller activities programmed in the different districts of Madrid, like a masks workshop, a “journey to Brazil”, Goyaesque dances and much more. So it is still worth coming to Madrid, it has a lot to offer.
Visit this link for some ideas: https://www.madridcultura.es/actividad/carnavales

We at Trixi.com would like to share with you how some of the bigger traditions are celebrated in Madrid during Carnival so that you can imagine a little bit the atmosphere. Some of them are really unique to the Spanish culture. So, let’s feel the liveliness and colours that Carnival brings to Madrid every year!

One of the most important happenings during Carnival is the Carnival Parade along the Manzanares river. Last year, for example, the parade was a great musical festival that allowed the public to enjoy the diversity and joy of the countless Latin American cultures that live in the city. The people were dressed in their traditional outfits and it was a journey through many different countries where you could practice different steps from samba to salsa.

All this while enjoying a mix between contemporary and roots cultures in which DJs and electronic music were combined with charangas, batucadas, orchestras and other traditional dances.
The explosion of colour was impressive. Other places like the Matadero -a former slaughterhouse converted into a cultural center- which we visit when we do our bike tours, hosted other more typically Spanish events or dance groups.

For several days costumes, dancing, music and colour fill the streets of Madrid.

For several days costumes, dancing, music and colour fill the streets of Madrid. However, on Ash Wednesday everything returns to daily life after the famous “Burial of the Sardine”.
This is a Spanish tradition consisting of a carnival parade that parodies a funeral procession and ends with the burning of a sardine-shaped figure.

It is said that the origins go back to the 18th century where a legend says that a shipment of spoiled sardines that arrived in the markets of Madrid during the reign of Charles III had to be burnt to avoid health problems. Other historians, however, relate the festival to Jerónimo Grimaldi, one of the last ministers of Carlos III, who was curiously nicknamed “el sardina” (the sardine) because of his extreme thinness. According to the story, Grimaldi left the city of Madrid and the people of Madrid decided to see him off with a great masquerade.

Whatever the reasons may be, this custom persists until today and the tradition that originated in the capital spread from here to other cities in the country and even to Latin America.
In Madrid, there is also a special parade for the Burial of the Sardine. The “Alegre Cofradía del entierro de la Sardina” tours the Madrid de los Austrias, starting at Rodrigo de Guevara street and ending at Tirso de Molina square.

Even Goya, the famous painter, holds tribute to the tradition of the burial.

“The Burial of the Sardine” is a small-format picture painted by Francisco de Goya between 1812 and 1819 and is related to a series of paintings of Spanish customs.

There is one last thing to mention about the importance of the sardine and then we “bury” this subject for today. During the Carnival days, you can find sardines in many bakeries and pastries in the form of chocolate in a tin and other sweets.

So don´t worry, if you don’t like fish. You can still eat a sardine!

Previous postBuy purple rain next to our Trixi shop
Next postWhen the almond trees blossom, spring is not far away…
Google Rating
4.7
Book Now