BoaMistura – “This is beyond Fiction, it must be Reality”,

BoaMistura – “This is beyond Fiction, it must be Reality”, 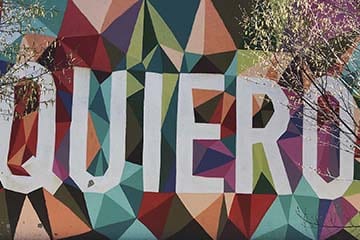 ``All your footsteps are my wings``

Did you know that walking through Madrid you can come across these and other beautiful poetic verses painted on the crossroads of the streets? It seems that they want to awaken, challenge, shake, question ….

“Te comería a versos” – that’s the name of the project launched in 2014 by the artists of the group Boa Mistura (“Good Mix”).
Here you will find a map where all the phrases that exist in Madrid are marked.

In the beginning, the phrases and verses of these artists appeared illegally painted on the streets at night, but since they were so beautiful, nobody took them as an act of vandalism, on the contrary, they were well received by the population and the city council.
Many of them talk about love, others question the existing sayings and thus transform their meaning.
After a few years, the phrases have become part of Madrid’s landscape and give it a more human, beautiful and reflective touch.
As the authors of the project say:

If we investigate a little more about Boa Mistura, we discover that this multidisciplinary group born in 2001 in Madrid has also left its characteristic mark in other public spaces not only in the capital of Spain but also in many cities around the world. They have carried out projects in South Africa, Brazil, Mexico, USA, Georgia, Algeria, Chile and other countries: 52 boats painted in multiple colours on the coast of the Dominican Republic, house painting inspired by traditional women’s hairstyles in a poor neighbourhood in Colombia or the word “Alegría” on the wall of the Cervantes Institute in the city of Algiers – with the participation of street people – are just a few examples of Boa Mistura’s work.

The people of Madrid enjoy another facet of their art in various spaces, for example while shopping in the markets. Here the painting is not on the ground but on the façades. And this time in very big, bright and vivid colours!
One of the markets is the Mercado de la Cebada in the district of La Latina; the façade looks very colourful and completely artistically renovated:

The market was founded in 1875 and to this day maintains its local and “barrio” character despite being only a 10-minute walk from the emblematic Plaza Mayor.

The building has large vaults that during the years of its renovation were painted by the Boa Mistura team and on the front wall there is a beautiful graffiti in huge letters: “Llena la vida de Color” (Fill life with colour). Just like that.Well put!
Just imagine: this project took 15 people, 2,000 kilos of paint and 1,000 hours of work!

Did you know that our private Tapas & Markets bike tour includes a visit to La Cebada market?
We encourage you to participate and you will be able to see in person one of the beautiful works of Boa Mistura, feel the atmosphere of a traditional market and taste some delicious tapas!

Another neighbourhood market where we can immediately recognise the handwriting and colours of this group of artists is the Mercado de San Cristóbal in the north of the city, almost at the foot of the Cuatro Torres financial complex, on the other side of La Castellana, between the rows of houses of the Colonia de San Cristóbal.

Here the phrase written in giant letters on the walls is: “Life is movement”. How true!

We take this phrase literally and move around Madrid by bike, discovering another mural in the neighbourhood of Tetuán and one more in the student campus…

Cheerful and full of colours and great wisdom, the murals of Boa Mistura touch our hearts and transform cities into more human spaces.

“The best has not happened and is not yet to come…it is happening”.